The objective of this project was to provide reliable empirical information on the built environment and on the distribution of population in the city of Tel Afar to inform humanitarian action and post-conflic recovery strategies. This entailed employing satellite imagery analysis, in-field photographic survey, and population modeling methods.

In June 2014, the Islamic State Group (ISg) took control of Mosul city and surrounding areas, including Tel Afar city. In October 2016, the Iraqi Security Forces (ISF) and Kurdish Security Forces (KSF) held military operations to retake all territories under ISg in Ninawa Governorate. Heavy military operations were conducted among which a 12 days intensive offensive that led to the retake of Tel Afar city on 31st August 2017. This conflict (2014-2017 Iraq Civil War) resulted – in addition to the many human loss, complex displacement of population and general instability – to the fragilization or unavailability of access to essential services such as drinking water, food production, electricity, primary health care, wastewater removal and treatment.

As of 2020, the recovery of access to essential services is still continuing and the Water & Habitat Department of the ICRC in Iraq is currently focusing its assistance activities on the recovery of water services of Tel Afar City.  Under this framework objective and empirical information on the built environment and the distribution of population are of fundamental importance to inform humanitarian action. 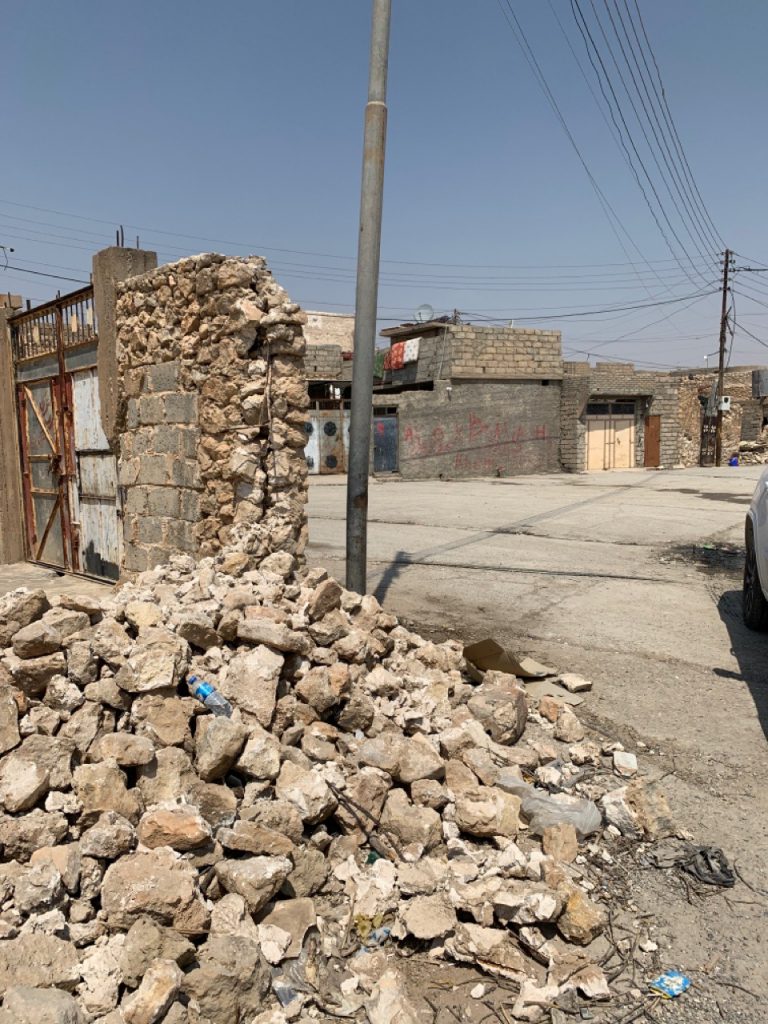 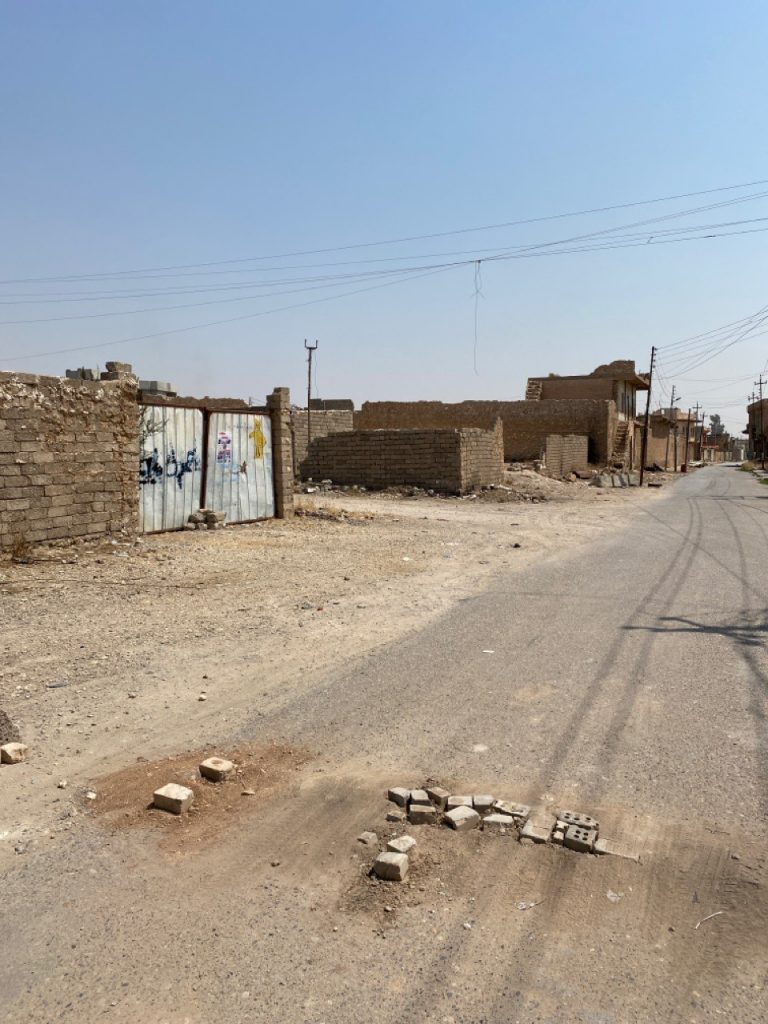 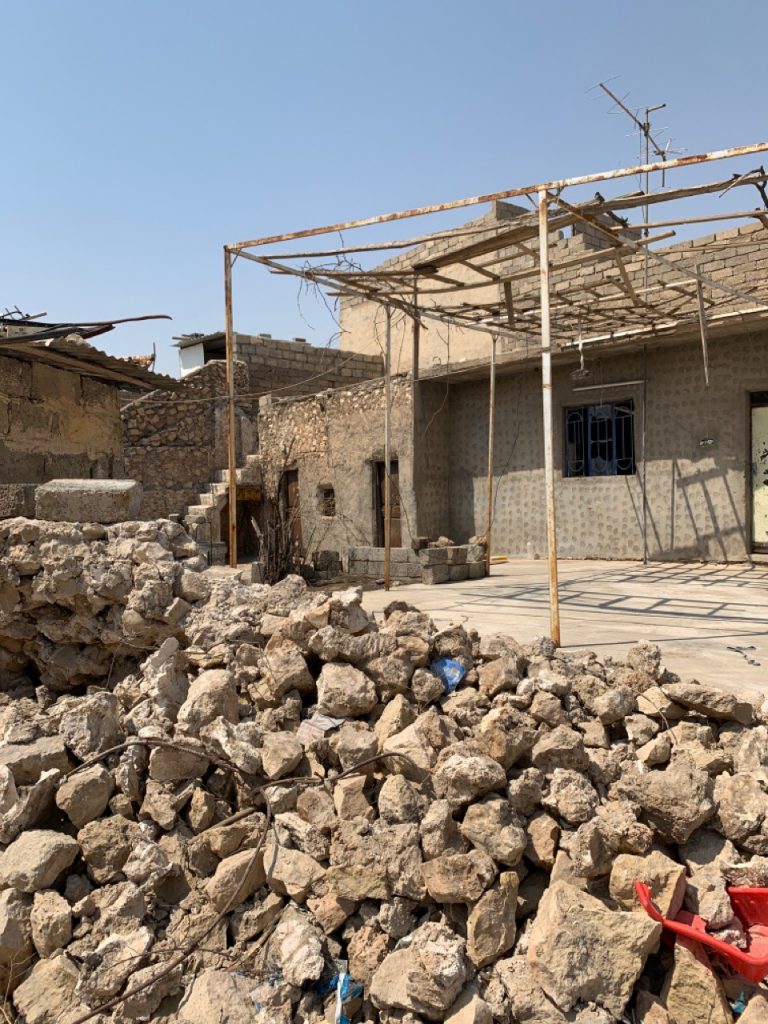 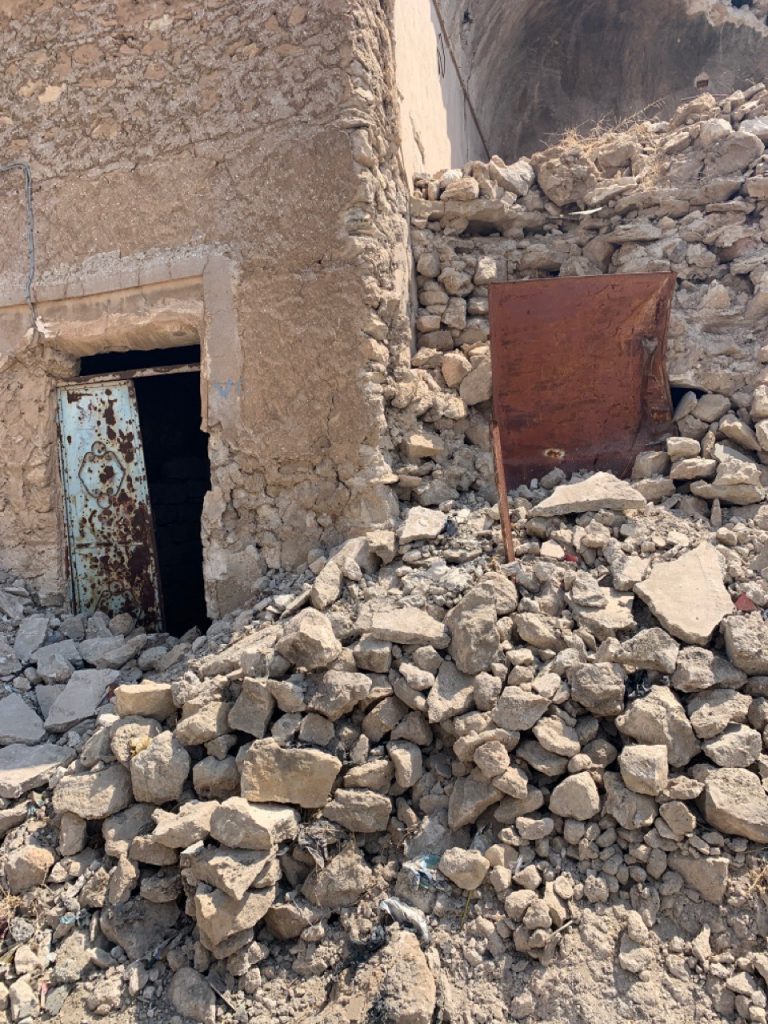 Few examples of the heavy damage and destruction caused to buildings and road infrastructure in Tel Afar by military raids during the 2014-2017 Iraqi civil war.

To generate data on population distribution, building footprint, land-use and destroyed buildings we adopted a stepped approach. First, we produced a set of vector maps of building footprint outlines from Very High Resolution (VHR) satellite Imagery covering the area covering the period considered (2010 – 2019). This also allowed to preliminarly label recognizable non-residential buildings (i.e. schools, industrial buildings…). Classification of destroyed buildings was also performed by overlaying building footprints and associated land-uses to satellite imagery and visually ascertaining the state of each building before and after the ISg occupation. To simplify the building detection process, we subdivided the overall built-up area of Tel-Afar into four morphologically homogeneous areas (MHA), that is areas where urban form characters show a certain consistency. To determine building heights, we carried out a photographic street survey on a selection of 400 points, equally distributed across the four MHAs.
The resulting information was used to retrospectively infer building heights to the time-series vector maps and to refine information on building landuse and destroyed buildings.  Based on this information, we generated the population model before, during, and after the conflict. The starting point for population and population capacity estimates was the Tel-Afar Census for the year 2009. This was used to generate the baseline population distribution model for the year 2010 and map it onto the corresponding vector maps. The model was then extended to the pre- and post-conflict time-steps (2014, 2017, 2019). To take into account the impact of conflict on occupancy rates, we generated two estimates for each time period, one assuming a low occupancy scenario and one assuming a high occupancy scenario. Population information was mapped at the level of individual buildings and aggregated at census area level.
MHA 01:
dense historical core
MHA 03:
regular residential area
MHA 02:
dense residential area
MHA 04:
sprawling fringe area
Location of the 400 photographic survey points, 100 for each MHA.

Population, land use and destroyed buildings through the conflict

Our analysis showed that, from the beginning of the period of study (2010), up to the outbreak of the Iraq Civil War (2014), Tel-Afar city was a growing urban center, both in terms of overall urban footprint and in terms of new residential buildings, new public interest facilities, schools, health services and industrial facilities.

The outbreak of the 2014-2017 conflict bore a major impact on the city as a whole, both in direct terms, through loss of building infrastructure and  of depopulation, and, more indirectly, by halting the process of development that was taking place in the years antecedent to the conflict.

Indeed, from our assessment, we were able to determine the number and predominant land use of buildings demolished during the period studied.

Based on our analysis, we were also able to preliminarily observe an asymmetry in the pattern of demolitions which suggests a selective raid strategy aimed at specific targets.

Two years after the conclusion of the Iraq Civil War, and despite the heavy losses sustained by the city, some encouraging signs of new urban growth are observed, albeit at a much slower pace than the 2010-2014 period.

As of 2019, population reaches almost pre-conflict levels and a re-start of construction activities is noticeable, particularly in peripheral areas of the city. This suggests a timid but ongoing process of recovery, both in terms of population capacity and urban footprint across all land-use categories.

Developing adequate responses for assisting people in urban areas that have been affected by armed conflicts couples the intrinsic complexity of urban settlements with post-war deprived conditions. The lack of objective and empirical data and more, the availability of partial and inaccurate data, prevent the development of any effective responsive strategy. Good spatial data are necessary for any urban intervention and in any context regardless the presence of conflict, deprivation or disasters. Accurate spatial data are even more necessary where resources are limited and local communities are difficult to reach and essential urban services have been damaged or totally destroyed during the conflict.  Under this difficult framework, despite the humanitarian approaches to the emergency, what is the best way to gather accurate data without arming humanitaria operators anc civilians?

We demonstrated here that remote satellite imagery, once properly managed, can effectively provide the necessary basis to detect main urban features, such as building outline, population spatial distribution and location of the main land-use and infrastructure.

An immersive A.I. Art experiment between poetry and photography for the Italian Pavilion at the XVII Venice Architecture Biennale.

We use cookies on our website to give you the most relevant experience by remembering your preferences and repeat visits. By clicking “Accept”, you consent to the use of all the cookies.

This website uses cookies to improve your experience while you navigate through the website. Out of these, the cookies that are categorized as necessary are stored on your browser as they are essential for the working of basic functionalities of the website. We also use third-party cookies that help us analyze and understand how you use this website. These cookies will be stored in your browser only with your consent. You also have the option to opt-out of these cookies. But opting out of some of these cookies may affect your browsing experience.
Necessary Always Enabled
Necessary cookies are absolutely essential for the website to function properly. These cookies ensure basic functionalities and security features of the website, anonymously.
Functional
Functional cookies help to perform certain functionalities like sharing the content of the website on social media platforms, collect feedbacks, and other third-party features.
Performance
Performance cookies are used to understand and analyze the key performance indexes of the website which helps in delivering a better user experience for the visitors.
Analytics
Analytical cookies are used to understand how visitors interact with the website. These cookies help provide information on metrics the number of visitors, bounce rate, traffic source, etc.
Advertisement
Advertisement cookies are used to provide visitors with relevant ads and marketing campaigns. These cookies track visitors across websites and collect information to provide customized ads.
Others
Other uncategorized cookies are those that are being analyzed and have not been classified into a category as yet.
SAVE & ACCEPT
Powered by